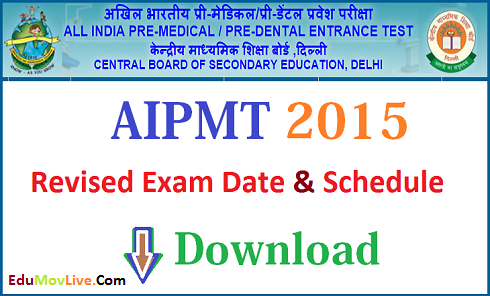 AIPMT 2015 Re-Exam Admit Card Release Soon: As per the New ruling by the Hon’ble Supreme court, AIPMT 2015 Exam has been Rescheduled for 25th July, 2015. So now as you might have checked the official notification, now every candidate who applied for the examination earlier is only eligible for Re-Exam. No Fresh application will be accepted for the exam. To appear in the examination, you require the AIPMT 2015 Exam Admit Card or AIPMT 2015 Hall Ticket for Re-Exam being organized on 25th July, 2015. So I have some important information about the AIPMT 2015 Revised Exam Hall Ticket, just check this article.

All India Pre- Medical/ Dental Test 2015 was conducted successfully on 3rd May 2015. But some of the complaints were made for the Leakage and cheating in the examination. Which were proven in Court, that cheating was done in big scale. Which made Hon’ble Supreme Court to take decision that AIPMT 2015 will be conducted again.