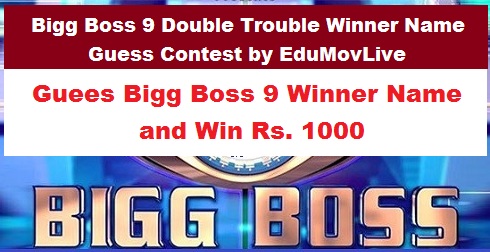 Bigg Boss 9 Double Trouble is rocking the Colors with its amazing concept and drama in the whole series. Bigg Boss 9 is hosted by Salman Khan and very soon on 23rd January, the winner will be announced. The show started with 20 contestants and now 2 top contestants are left for the Grand Finale by elimination. So the Top 2 Contestants are Prince Narula and Mandana Karimi. But there will be a single winner only. And the contestant who will win the Bigg Boss Season 9 will surely get a prize money of Rs. 1000 that will be huge. We also have a prize for you guys. You need to Guess the Winner of Bigg Boss Season 9 and let us know.

Contest has been started from 22nd January 2016 at 12 AM and will be Closed on 23rd January at 8 PM. Participating is really easy. Top participate in the contest, follow these simple steps-

For any Further Queries Regarding “Bigg Boss 9 Double Trouble Winner Name Guess Contest by EduMovLive” you can mail us at edumovlive@gmail.com

Don’t miss the opportunity and Win Rs. 1000. Two persons Will get this opportunity.