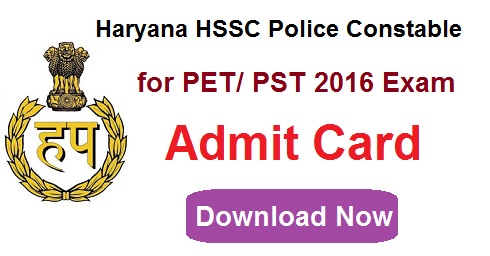 The examination of PST/ PET is going held on 8th March 2016 to recruit  the candidates for the post of Police Constable. There are many candidates (both male and Female) are interested in this recruitment, so they apply for this recruitment. Thus, HSSC is going to release the Haryana Police constable Hall Ticket  2016 or haryana police constable admit card 2016 for the candidates. So they can successfully attend the examination paper. Candidates can download the admit card from the official website.

This news is for the candidates who applied for the examination of PET/PST which is going to  conduct on 8th March at various examination centers. There are 7200 vacancies for the post of the police constable. So a huge number of candidates are appearing for this examination. Candidates can get their Haryana Police constable Hall ticket 2016 from the official website.

The candidates will select for the post of police constable through this selection procedure.