How does Airplane Wi-Fi work- Air travel is something which has become really important in our life. It proves to be most convenient to travel through airways as it saves time while providing you with all the basic and even some additional facilities on the go.

Considering the Wi-Fi usage and requirements, it can also be counted into the list of basic requirements which people need to have in current times. Now- a- days, people do not wish to just enjoy the view from an airplane but also take pictures of it and post it then and there only for which they require airplane Wi-Fi.

With the advancement in technology, many flights are starting providing this service to their customers. This service was not offered to people previously, in fact, they had to switch off their phone when they were on the airplane. So, it is a really good step.

But, the question is how does the Airplane Wi-Fi work?

The on- board Wi-Fi service works in two different ways which are:- 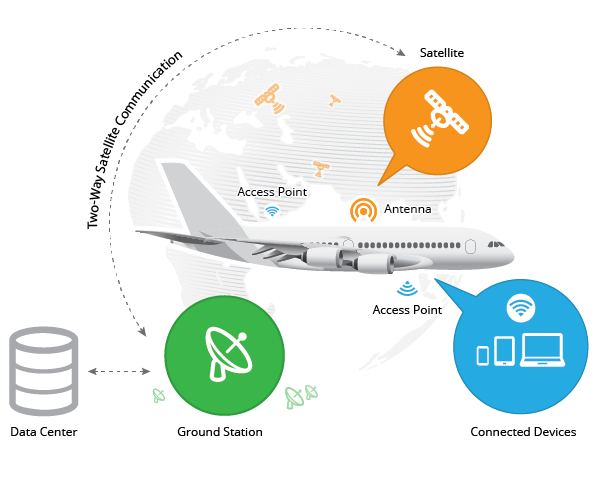 Let’s discuss them in depth in order to develop our understanding of it in a better way.

The signals are sent from airplane to the satellite orbiting in the space and to the ground thereafter. This is how you get airplane Wi-Fi with the help of satellite. You can get three different types of performance level from the satellites-

The satellites featuring Ka- band are still to be launched in near future. It will provide you with the highest range of speed out of all three bands.

The Ku- band provides the speed of around 20- 40 Mbps per airplane. The speed varies on the fact that how many airplanes are in the spot beam range of the satellite at once. If there is more than one airplane in the range then the speed will be divided and customers will have to get satisfied with slower speed only.

You get quite slow speed from the L- band satellites which will be around 400 kbps per channel in an airplane. The maximum speed you could get will be 422 kbps which makes it the slowest among all the three different bands.

Via Ground- Based Towers

Airplane Wi-Fi can also be made available through ground based towers. In this, the signals from the airplane are sent directly to ground. The antennas are used to send and receive signals. These antennas are present on the ground as well as on the belly of an airplane. As the airplane flies, the connection keeps on shifting from tower to tower just like it does with your phone when you are using it while driving from one place to another.

This costs relatively cheaper than using the satellite technology. Though you won’t be able to stream videos with its help, it can be easily used for exchanging some important emails and casual internet surfing.