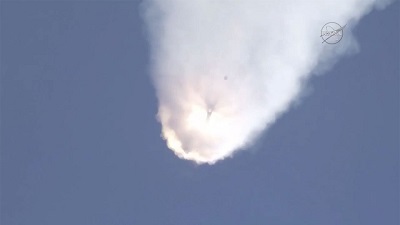 SpaceX Falcon 9 Launch failure was a turning event in the Space Events. In the video of the fireball that engulfed SpaceX’s Falcon 9 rocket Sunday. A little capsule, can be seen falling through the sky, a poignant reminder that rocket explosions can be survivable.

NASA has learned this important lesson, but a little late. After loosing Two space shuttles and 14 astronauts.

The Dragon capsule that flew aboard the ill-fated Falcon rocket Sunday is nearly the same as one SpaceX is designing to fly people. Crew Dragon, however, will have an escape system that will enable the capsule to fly away from an exploding rocket and parachute to safety.

SpaceX demonstrated how the system would work in an emergency on the launch pad, last Sunday. During the test, a Dragon capsule fired its eight engines to catapult itself off a simulated Falcon 9 rocket and climb into the sky over the Atlantic Ocean at a peak speed of 345 mph. which lasted just less than two minutes.

As per the information SpaceX will have a more ambitious test, that would be done next year. The Test will take place aboard an actual Falcon rocket, at about the same point in the flight as when Sunday’s accident occurred.

The Falcon 9 blasted off while delivering a Cargo ship to the international Space Station for NASA from Cape Canaveral Air Force Station in Florida at 10:21 a.m. EDT.

The rocket had passed the moment of maximum aerodynamic force — referred to as “Max-Q” — when ground controllers lost contact with the booster. It exploded about 2 minutes, 20 seconds after liftoff, creating a shower of debris that rained down into the ocean, northeast of SpaceX’s Cape Canaveral, Florida, launch site.

SpaceX president Gwynne Shotwell told reporters after the accident, “Ground controllers received some signals from Dragon after the rocket broke apart, indicating it survived the explosion somewhat intact“. During the in-flight abort test, SpaceX plans to simulate a mid-air accident, prompting the Dragon capsule to automatically fire its eight Draco engines, positioned around the capsule’s circumference, and fly away.

Boeing is planning a similar test in 2017 of its CST-100 abort system. Boeing is building a second space taxi for NASA.

Eric Stallmer, president of the Commercial Spaceflight Federation, said “Sunday’s accident should not impact NASA’s ongoing Commercial Crew program, which is aimed at breaking Russia’s monopoly on space station crew ferry flights before the end of 2017”

SpaceX is focusing on a problem with the Falcon rocket’s upper-stage engine as the likely cause of Sunday’s accident. Shotwell said expects the Falcon to be grounded for several months while an investigation is underway.

It seems that Sunday accident would not stop NASA from doing there work. They would improvise on the Faults and move on.