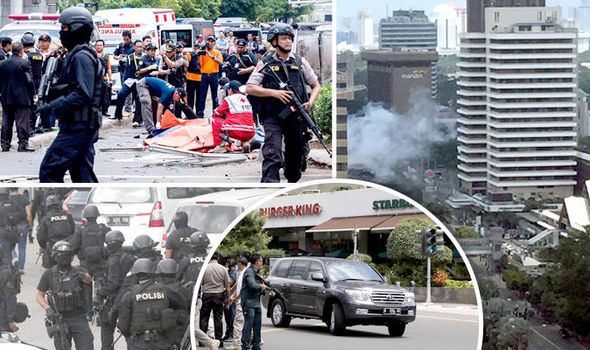 Multiple explosions have been reported in the Indonesian capital, Jakarta, with reports of gun battles on the streets. The shocking news is that six people are believed to be dead. Indonesian police are reporting that four attackers are among the six killed. The blasts were centered on Thamrin Street, a major shopping and business district close to embassies and the United Nations offices. At least 14 attackers reported involved in the attacks and a manhunt is under way. Indonesian President Joko Widodo has condemned the ‘act of terror’ and appealed for calm. Here this article, we present detailed news for this attack:

Militants launched a gun and bomb assault in the center of the Indonesian capital on Thursday, killing at least six people, police said, in an attack on a country that Islamic state had threatened to put in its spotlight. While suspicion is likely to fall on Islamic state or its allies, police said they did not know who was responsible and President Joke Widodo urged the public not to speculate on who was behind the attack. Police said there were at least six explosions and they had shot dead three of the attackers and captured four. Three suicide bombers were suspected to have been involved while three policemen and three civilians were also killed. The main thrust of the attack was on an office block and it began with a blast outside a Starbucks café on its ground floor. The Starbucks café windows are blown out and many dead people on spread on the road. There has been a lull in the shooting but someone is on the roof of the building and police are aiming their guns at him. Indonesia has been on edge for weeks over the threat posed by Islamist militants and counter terrorism police have launched a crackdown on people with suspected links to Islamic State.

The last major militant attacks in Jakarta were in July 2009, with bombs at the JW Marriott and Ritz Carlton hotels. Media reported that a Dutch person and another foreigner were among the casualties on Thursday but it was unclear if they were dead or wounded. Police snipers were deployed among hundreds of other security officers, some in armored vehicles. A bomb disposal unit was seen entering the building where the Starbucks is located, which also houses a cinema where at one stage, police exchanged fire with gunmen.