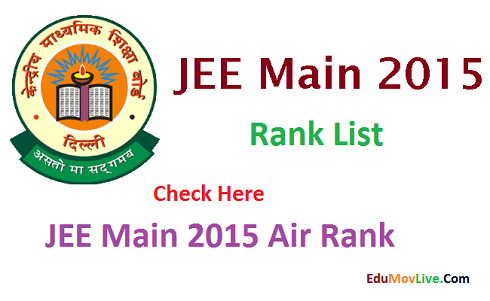 JEE Main 2015 Rank List was scheduled earlier to be released on 29th June, 2015. Due to High Court issues it was delayed and was scheduled for 1st July, 2015. So today at 12 PM the All India Rank for JEE Main 2015 has been announced and those lucky candidates who passed and got the AIR, we wish them good luck for the future.

Get here JEE Advanced 2015 First Round Counseling Schedule and Details

JEE Main 2015 AIR will be released on the official web portal of JEE main i.e., jeemain.nic.in and on CBSE portal cbseresults.nic.in. The Board result data will have 40% weightage in the JEE Main Rank List. And rest 60% will be added by the marks scored in JEE Main 2015.

Stay connected to EduMovLive.com for more information. We will keep you updated with all the information about any examination, result, Bollywood movies etc. If you have any query about the JEE Main 2015 Rank List or Registering, you can contact us using the comment box below.

To check the JEE Main 2015 Rank List you need to enter your Roll Number and your Date of Birth. It will open a new window from where you can check your JEE Main 2015 AIR.