Rogan art is an art originated in Persia around 300 yrs ago. It travelled to India with the Afridi tribes of Persia through Afghanistan and Pakistan to reach the northwestern part of India. In Nirona, a village near Bhuj (well-known village of Gujrat). Rogan Art is an old tradition for hundreds of years ago. The word ROGAN  is derived from the Persian word for oil thereby indicating where it has come from. Rogan is basically the paste in which pigment colours are mixed to make the colour which is derived from the process which involves the heating( with continuous stirring) and further cooling of the castor oil. This process is mainly carried out in the forests and the oil is heated till the time it starts catching fire and also special care is taken so that the oil does not get burnt. This process takes around 12 hrs. but if the consistency of the paste is not fine (i.e. according to the requirement) the paste is heated again and further cooled till the time it obtains a rubber-like nature. 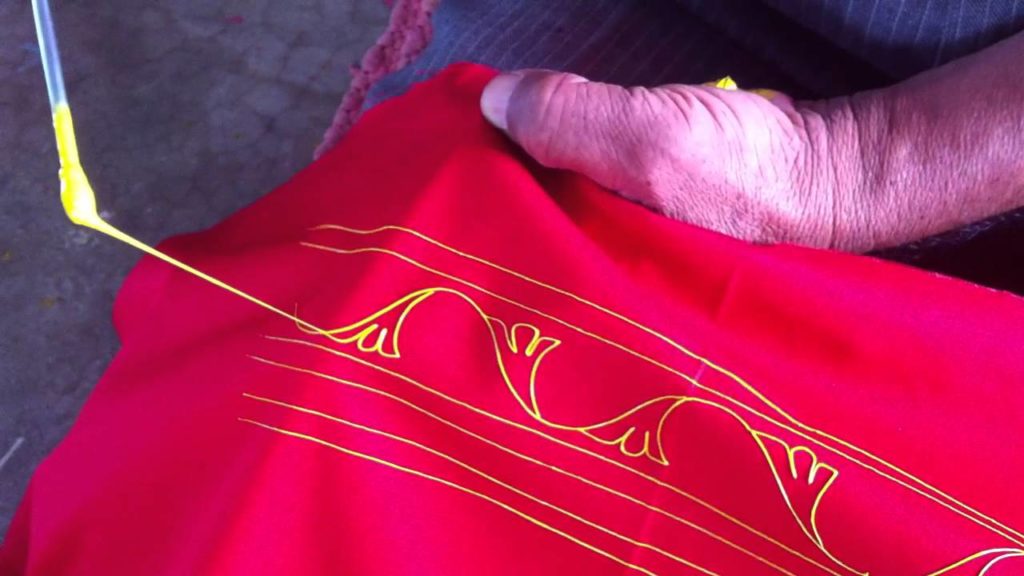 After the formation of this paste known as Rogan, the Rogan Is then mixed with pigment colours (specially brought from Ahmedabad due to its natural quality) by grinding them with stone. It takes almost half an hour to make the Rogan paint from Rogan and pigment colours. The Rogan paint thus formed is then kept immersed into water in earthen pots with their shelf life of approx 10-15 days.

Rogan Art- How is it done?

Rogan art is done with the technique of air weaving which implies that the design is weaved in the air without making any contact with the fabric. Rogan  paint is first taken in a small amount in the palm and is beaten with the 6 inches long wooden stick or needle so that the Rogan paint forms a thread like structure on being stretched, after this the paint is taken in very small amounts from palm of the hand to the stick and then it is directed through air to form the design on the fabric with the design in their mind.

Why Rogan Art is not successful?

Many people who have persuaded this art had abandoned it due to the crucial circumstances but some families continued their legacies over three centuries like Khatri family (Nirona village of Kutch district, India).

The orthodox thinking towards the craft as “cottage” or “village: industry needs a  Severe approach to change the mindset of the people that they can be reviewed as the rural entrepreneurs or the creative entrepreneurs who with the help of their art can transform craft industry into the creative industry.

The idea of changing a liability to an asset needs an awareness to involve consumer by developing a market around giving the opportunities to the poor is surely the need of the hour.

The reasons are many for art to be underrated but only the artist knows how he holds the criticism and unappreciation to his love without any fault of his.

This is a widespread dilemma in which so many arts have been left unappreciated and it has become the problematic issue for the artists who have no motivation, desire to remain firm to his art form. This happens because of lack of awareness, technology, money, good communication skills, infrastructure, not socially updated with market demands.

The sharp understanding of design innovativeness and product diversity is yet to be learnt and implemented.

To keep this art form alive in today’s time, an artist can do workshops in school, colleges to keep people connected with their roots.

Also the govt. can take a stand to start up a tv channel comprising and contributing to the art forms of India, which may serve as the platform for different artisans to make people  aware of various art forms so that people can know about it and can work on it.