Every single fan of the Shahid Kapoor is waiting for the Marriage Pics of Shahid and Mira. The much awaited inside pictures from Shahid Kapoor’s pre-wedding function are out. In one of a picture from the actor’s sangeet ceremony, the wedding couple is seen dancing together like no one’s watching.

The bride Mira is seen wearing a lemon yellow colored lehenga choli while Shahid looks dapper in a red coloured Nehru jacket over his Churidar Kurta. All eyes were focused on the two as they reportedly danced to a wedding song at the sangeet ceremony held at Chhatarpur farm in Delhi on July 6, 2015. Till the time everybody was unknown about the wedding. A report on Mid-day.com claims that the playlist at the actor’s sangeet had Sasha’s hit numbers, which included ‘Dhating Naach’, ‘Tu mere Agal Bagal hai’, ‘Saree ke fall sa’, ‘Mauja hi mauja’ and ‘Raat ke dhai baje”. 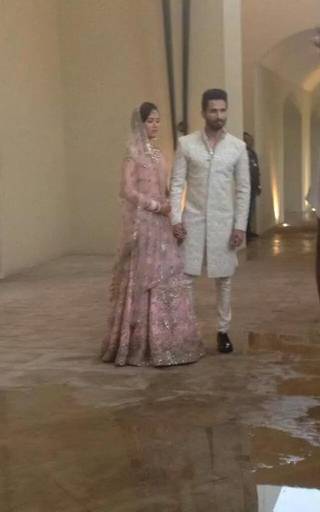 Shahid Kapoor, will tie the knot with Mira Rajput in Delhi on July 8, 2015. The two families (Mr. Kapoor and Mr. Rajput) have already reached the capital as finer details of their nuptials get chalked out.

The wedding ceremony will take place at Mira’s Chattarpur farmhouse. The marriage ceremony will be followed by a grand after-party at Oberoi Hotel Gurgaon. The wedding will be attended by friends and the leader of the spiritual group Radha Soami Satsang Beas.

Dressing for the Wedding:

As per the Reports, Designer Kunal Rawal has designed 10 outfits for the groom. Also a lot of ethnic outfits like achkans and bandhgalas are part of Shahid’s wardrobe. Mira Rajput will be seen in Anamika Khanna creations. Te couple’s wedding attire will be colour coordinated.

The menu will be strictly vegetarian. The After wedding party will have a mix of Indian and continental cuisine. Shahid’s family members and Mira’s Parents finalised the evening food spread. It was also reported that there will be a special stall of fancy Jaipuri Paans.

After Wedding party will be held on July 12 in Mumbai.

Written By
Rancho
More from Rancho
CTET Answer Key 18 September 2016 will be published on the official...
Read More