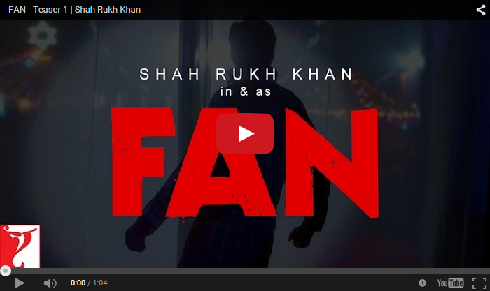 Fan 2016 is the upcoming SRK Movie. Which is already trending in everybody minds, now as the Fan Movie Teaser 1 has been released by Shah Rukh Khan on Twitter. Twitter has become a great platform to release the Movie Information, teaser, trailer etc. So now, SRK released his upcoming Movie Fan First Teaser online. And everyone is excited who have watched it. If you haven’t watched it or finding it difficult to find the official Fan 2016 Teaser. Here I am giving you the Direct Fan Movie 2016 First Teaser. You will be amazed to see the SRK Fan Movie Teaser Trailer.

Fan Movie is upcoming Hindi Movie directed by Maneesh Sharma and Produced by Aditya Chopra. Shahrukh khan is in the lead role of the Movie. The Movie Fan is about the biggest ShahRukh Khan Fan Gaurav. He wants to meet him and talk to him. So the movie Fan is all about how Gaurav meets his dream Superstar Gaurav.

Now without wasting much of your time here is the official SRK Fan Movie 2016 Teaser and hope you will enjoy it.

The Movie Fan 2016 was actually scheduled to be released in Early 2015. But due SRK injuries during Happy New year, it was delayed to last 2015. As per the source now, the Movie Fan Release date has been shifted to Early 2016 due to some complex visual effect. So now it is sure that the Fan Movie will be released in the early 2016 hopefully the Date is April 15, 2016.