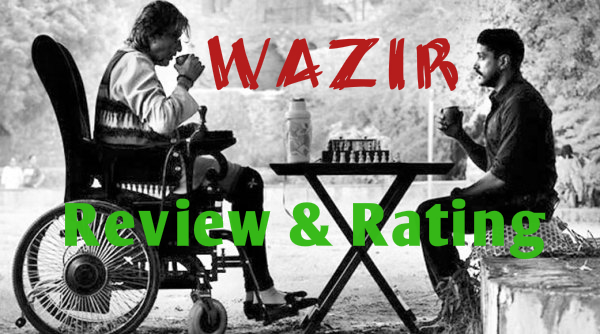 Check here Wazir Reviews and Rating. Wazir is the first Bollywood movie of 2016 which is an emotional, Intelligent and fast-paced Roller Coaster ride. The movie is releasing on 8th January 2016. Before going to watch the movie check here Wazir Review, Wazir Rating and Wazir First Day Box Office Collection Predictions.

Wazir has hit the theatres, PVR, and multiplex. Wazir Movie is the first Bollywood movie to be released this Year 2016. And it has disappointed the audience, us and other critics too. Wazir is directed by Bejoy Nambiar and written by Abhijat Joshi and Vidhu Vinod Chopra, and is produced by Chopra. Those who have watched the movie enjoyed and felt bad at the same time. The movie Wazir attracted the audience to the Theaters, but the movie story, direction doesn’t seem to impressive. Let’s check out the Wazir movie direction, Wazir Movie Reviews, and rating.

Wazir Reviews and Rating- 1st Movie of 2016 is A Emotional, Intelligent And Fast-Paced Roller Coaster Ride:

The Movie starts with an interesting scene and then moves on to the boring and predictable story. As per the Director, writer, and producer, the movie Wazir is a thriller action movie. It misses the thriller part, you will wait for the suspense and there will be no suspense, you will predict the movie yourself.

So if you are planning to watch the movie Wazir as a Thriler Movie, then you should stop yourself from doing that. Let’s talk about the Wazir Movie Stars Performance.

Let’s start with the Main lead role hero, The Farhan Akhtar: With every single movie he does, it seems his talent are increasing and acting skills are improving. He has done justice with his role, as Danish. Getting Broken and then rising up for his friendship, seems impressive. Now, the Big B (Amitabh Bachchan) as Pandit Omkarnath does his job well. But we cannot call this role as one of his best. Or else our expectation are higher from him and he done is role. His dialogue delievery has always been the amazing one, and same is in the movie Wazir I am pretty sure, his dialogues will be on your tongue for some time.

Neil Nitin Mukesh does not have much scenes in the film, but he scares the hell out of you with his evil antics. The another Cameo played by John Abraham is completely wasted in the film with a character that has no detailing. If we summarise the Wazir Movie, it could have been the best movie of Farhan Akhtar and Amitabh Bachcahn. They could have ruled the Box Office and the Collection for the whole year. But the script was not promising, the suspense was killed being a thriller movie.

If we rate the movie Wazir. It would be obvous 2.5/5. Hope, we would see more of Farhan Akhtar movie in coming times with some amazing script and his improving skills.