Ardh Kumbh Mela 2019 Prayagraj: ARDH KUMBH Mela or MAHA KUMBH MELA is a word which relates to a mass Hindu holy expedition or pilgrimage where the Hindus gather and took bathe in the sacred or holy river which considers as a confluence of the three sacred rivers Ganga, Yamuna and Saraswati, which is mystical, and on the other hand, made, Prayagraj as a city of pious and considers Triveni Sangam in Prayagraj as an auspicious holy place.

With the upcoming 2019, the biggest holy event noticed among all Hindu believers and already engaged them in the pre-arrangements of Ardh Kumbh Mela 2019. It is considered to be the largest Human assemblage on the Earth. The Maha ARDH KUMBH MELA happens to conduct in every 6 years, as per the Hindu mythology, there is a belief of the Hindu masses that if they Kalpvas over the period of Kumbh, and residing in this Holy place, they might get ELIXIR (AMRIT). Therefore, in search of Amrit, and to attain blessings of our spiritual powers and to greet Devas with their austerity, they live for almost 1 and a half month and engaged them in the Holy activities which nurtures them with spirituality and peace.

There is no certain concrete proof to start of the ARDH KUMBH MELA, but it has a belief in Hindu mythology, that there was a time where Devas and Asuras, set with a war with each other for 12 days approx., where 1 day is equal to 12 days for the celestial beings in the human race, hence to end up with this, they both come with a conclusion to churned the sea on equated grounds, but in between few drops of Amrit (nectar) fall off over these 4 places , considered to be sacred or holy( Haridwar, Prayagraj, Ujjain and Nasik), in a lapse of 6 years, in search of the nectar, and to get away from all sins and to drank the spill of immortality over the time. Majorly, ARDH KUMBH plays a pious activity for the Hindu devotees due to their holy beliefs that the holy water over these religious places are turned up with some divine or sacred powers, and hence, to attain salvation they take a dip in the holy river to get rid of every sin.

Hence, the Hindu devotees will stay with this time period over the tents and keep on enchanting spiritual mantras and stay close to the great divine powers as per the beliefs of Hindu Devotees, but this time, government took great initiative for this mass event ( ARDH KUMBH Mela 2019) which is to be held in Sangam Triveni in Prayag Raj and made significant changes over the time to provide best facilities to the Hindu devotees and for the masses who will attend the Holy festival.

As we hear the name of KUMBH, one can easily depict a perfect picturesque of the Triveni Sangam in Prayag Raj, where the Aksharas will take Snaan (bathe) into the river, sadhus will enchant the mantras and even the pandals will chant the religious beliefs, and the whole surroundings will enlighten with the divine powers with the echo of the mantras and will preside spirituality, peace, immortality, one in all, with the feeling of attainment of salvation in the chaos of life.

After knowing the importance of Kumbh, the government took initiative to organize this religious ceremony with better facilities so that the millions of pilgrim get all the suitabilities, which even fill the heart of devotees with great joy and immense faith.

Allahabad Ardh Kumbh 2019 will begin on January 15, 2019, and as it is said the basic conceptual idea behind this, of the devotees is to promise to get blessed with an eternal life, all free from sins, that comes to loop in a purpose only after this magnificent event.

The venue of Ardh KUMBH MELA 2019, has been decided with the position of the sun, the moon and the Jupiter, and if in the case when Jupiter is in Aries or Taurus, and the sun and the moon are in Capricorn during the month of Magha (i.e. January-February). Due to the planetary movements, one can easily decide the venue, since the MAHA KUMBH is done to drink the immortality and gets life to get over with eternal peace and salvation.

Last time MAHA KUMBH in Allahabad has been held in 2013, 15th January.

KUMBH in PRAYAG RAJ is for 55 days in every 12 years, now this time it is being celebrated after 144 years with a lapse of 12 years, hence certain provisionary changes have been done and mandatory facilities were initiated for the devotees.

The end date of Maha Kumbh in Prayag Raj is on 4th March 2019 with Maha Shivratri, which is again a pious event for the religious believers.

For this holy mega event, special initiatives have been taken by the government and the charged has been given to CM Yogi Adityanath.

He has promised to provide all the basic facilities to the pilgrims who will be visiting the city.

SHELTER HOMES– special facilities have been provided to the visitors for accommodation in form of shelter homes and temporary tents with certain basic amenities to accommodate pilgrims.

SANITATION FACILITIES– proper toiletries has been designed for the visitors with proper cleaning facilities over the split areas in Triveni Sangam.

INFRASTRUCTURE – special infrastructure facilities have been made for the Akharas (congregation or league) and has been developed at four Akharas over the river Ganges for millions of devotees who will visit for the mass holy event.

800 SPECIAL TRAINS were laid up to gear the railways and to provide smooth transportation facilities to the visitors, one has reduced fares and run some massive projects for Hindu pilgrim surge.

ARCHITECTURE- the whole architecture of the city PRAYAG RAJ has been re-filtered with the beautiful wall paintings with the sketches of great legends, Late Sri Atal Bihari Vajpayee & A PJ Abdul Kalam on the District Court Building.

Wall paintings of many religious saints and sadhus have been made to allure the beauty of the cultural heritage of the city, and to redefine the significance of this Holy Spiritual Place.

On the other hand, the paintings of the defence forces have been made, to showcase the power of Indian Army Force, with their strengths in tricolor of flying fighting jets, which even gives a new phase of colors to the city.

Walls, chowks and streets are being decorated with beautiful paintings which depict the Prayag Raj Swacchh and Namame Gange Project, which is outlined with the awareness programme under ARDH MAHA KUMBH 2019.

For the honour of the visitors, the whole city has been given a new look or makeover, twice a time, the budget has been approved what was there in 2013, as approved by the State Government, The Government has approved 500 crores approx budget for the Ardh MAHA KUMBH 2019, and sanctioned the budget keeping in mind the suitability of the devotees and the importance of this massive holy spiritual religious event.

Ardh Kumbh 2019 LOGO- special logo has been designed for the ARDH KUMBH 2019, with some realistic idea and innovation. Mr. Naik has designed the logo with a multi-coloured concept which comprises temples, a Kalash, swastika and seers,and has unveiled on last Tuesday at Raj Bhavan on 11th December 2019, which again provides ARDH MAHA KUMBH 2019, a new empirical figure, which will now last for the hundreds of years to come with world’s largest mass peaceful gathering and on the hand, provide the city, Prayag Raj, a new resemblance or figure which intact the devotees or visitors, with the beauty of the Intangible Cultural Heritage of the city. 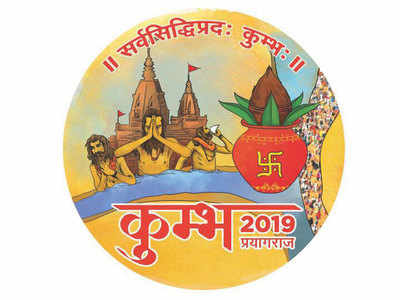