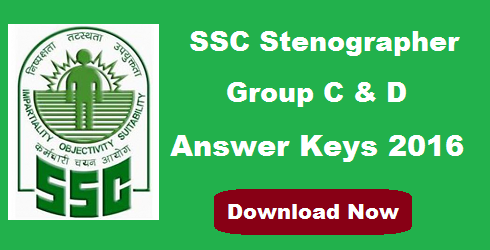 Staff Selection Commission has been conducting various examination throughout the past years. And they have the same plan for 2016. Thus, the calendar started with a new year, thus the examination. The Exam which was conducted on 24th January was for the post of Stenographer for Group C and D. The number of candidates who took the exam was above 4 lacs all over the India. It seems the competition is tough this year as well because Government Jobs are low and unemployed candidates are high. Make sure if you have appeared in the exam, you must have given your Best.

You can check the answers from those SSC Answer Sheet, but they are not fully reliable. Not because they are by private institutes. But there some tricky questions which will be confusing and the officials answer will be the final one.

Once the official i.e., SSC has released the SSC Stenographer Answer Sheet 2016. Follow the steps given below and download the copy of SSC Stenographer Group C and D Answer Key 2016 for your Use: