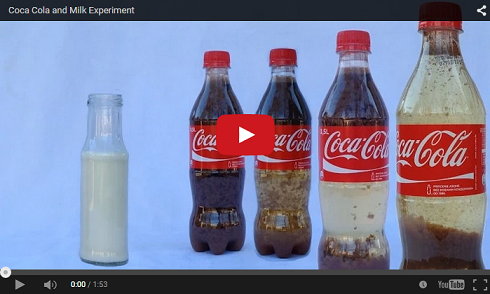 I recently when through this amazing video. It shows the mixing of Coca Cola and Milk. I first thought that something burst will happen. like Coca Cola will buzz out of the cap, or it would create a new Mocktail. But what happened was unexpected.

The Outcome of the Mixture:

When Milk was introduced into Coke bottle, it made the changes in it. First the bubbles were seen, then slowly slowly it settled down. Now after the settlement of the Milk in Coke, the coke started to get separated from the Water. It created a chocolate color mixture which settled down and was really thick.